Hydropool Vs Endless Pools; Which One Is Better? 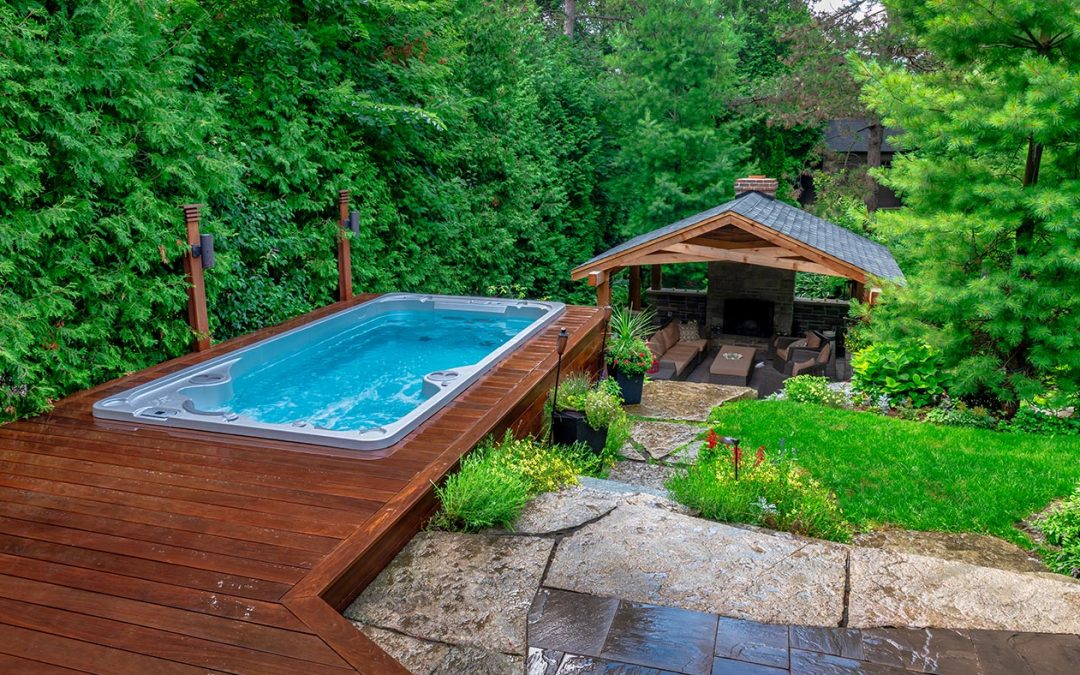 The Original Endless Pool is a build it yourself pool kit with a steel structure and vinyl liner. They can be made in a variety of sizes, depending on your needs and can be ordered with or without a swim current system. Since they don’t have a finished cabinet, Endless Pools need to be built into a deck or concrete bunker or they look cheap and unfinished.

Endless Swim Spas are built like other swim spa brands with an acrylic shell and finished resin cabinet attached to a wooden structure. Endless swim spas can also be purchased with or without a swim current system.

Verdict: We strongly recommend going with a traditional acrylic shell swim spa like those found in Hydropool swim spas or Endless swim spas over the vinyl liner construction of the Original Endless Pool.

Hydropool and Endless Pool also differ in how they generate their swim currents. In order to accurately compare both of these systems, we will look at the three major components that go into a good swimming experience; turbulence, power and controllability.

Swimming in turbulent water is not fun. The varying pressures push you around and make it difficult to stay in the swim lane. Fortunately, both Hydropool and Endless Pools have systems in place to help reduce turbulence in their swim.

Hydropool’s AquaTrainer swim spas are powered by two powerful swim jets, which send water through their industry exclusive V-Twin jets. These jets spread the current evenly over a wide area while also breaking up turbulence in the water using a series swim fins that stop the water rotating. This creates a smooth, turbulence-free swim current that is easy to swim against.

Rather than using swim jets, the swim currents in Endless Pools and Endless swim spas are both powered by a turbine. This turbine forces water through a swim grate that breaks up the swirling motion created by the turbine and creates a smooth swimming current.

Verdict: Both Hydropool and Endless Pools have swim current systems that produce a smooth, wide current that is easy to swim against.

No matter how smooth the current is, if it isn’t powerful enough it will still be frustrating to swim in.

Hydropool swim spas create a current that is capable of reaching speeds of up to 10km/h. Endless Pools and Endless swim spas, on the other hand, are only capable of creating a current of around 6.5 km/h. For beginner swimmers this isn’t an issue, however intermediate to advanced swimmers will likely find this lack of power frustrating.

Verdict: Hydropool swim spas create a much stronger swim current than Endless Pools and Endless swim spas. Intermediate or advanced swimmers are therefore be much better off with a Hydropool.

One of the most important components of a swim current system is the controllability of the swim current’s speed. High powered swim currents are great but if you can’t turn down that power most swimmers won’t be able to keep up.

Both Hydropool and Endless Pools provide controls near the swim current that allow you to easily increase and decrease the speed of the swim current, allowing for swimmers of all abilities to find a comfortable swimming speed.

Hydropool swim spas has recently taken this one step further with their AquaPro Controls and WaterWatch. AquaPro not only lets you set a consistent speed, it is also the first swim spa control that has preset interval training programs that automatically change the speed of the current to give you a better workout. Their new WatchWatch also helps you maintain a consistent heart rate by vibrating when you fall out of your target range; letting you know when you have to speed up or slow down.

Verdict: Although both companies allow you to easily vary the speed of the swim current, Hydropool’s new AquaPro Controls and WaterWatch give them the edge.

While often overlooked by swim spa buyers, the filtration system is one of the most important components of any swim spa. Without a good filtration system, the swim spa water will easily turn cloudy from a buildup of contaminants in the water. To clear the cloudiness usually requires a mixture of manual cleaning and added chemicals. This not only costs you money from all the chemicals you have to buy, it also means a ton more of your time devoted to maintaining your new swim spa.

Like most swim spa manufacturers, Endless Pools uses a hot tub style filtration system. While this system does work well in hot tubs, swim spas are simply too large for this style of system to be effective.

Hydropool, on the other hand, filter their water using their industry exclusive Self-Cleaning filtration system. This system uses the same pressure side filtration that is common in in-ground pools and is so efficient that it can clean all of the water in the swim spa in less than 45 minutes! This means cleaner, clearer water with almost no maintenance.

Fortunately, both Hydropool swim spas and Endless swim spas feature good insulation systems. Hydropool’s is just a little bit better though. Their Hydrowise insulation not only insulates the shell of the swim spa, it also has a second layer

Note: While Endless swim spas are insulated, the Original Endless Pool is not. If you’re planning on using an Endless Pool in the winter, you will need to design and install an insulation system on your own.

On the surface, both Hydropool and Endless Pools are priced very similarly. Both start around $15,000 and can rise as high as $35,000-$40,000 for a fully loaded model. When you look a little deeper however, you’ll see that Hydropool swim spas give you more value for your money.

Both Endless swim spas and Hydropool swim spas advertise a starting price of around $16,999, which can rise as high as $35,000-$40,000 depending on the size and options included in the swim spa. Since Endless Pools is a US based company, however, that quoted pricing is in USD. Hydropool, on the other hand are built in Canada and quote their prices in Canadian dollars.

Verdict: On average, Hydropool swim spas are priced at or below Endless swim spas and far below the cost of the original Endless Pool, once building costs are factored in.

While both Hydropool and Endless Pools make great swim spas, the edge has to go to Hydropool Swim Spas. Their swimming systems are more powerful and provide next generation control features like automated programs, their Self-Cleaning filtration keeps the water clean and clear with less maintenance, their Hydrowise insulation is second to none and they’re priced at or below the cost of an Endless swim spa.

We specialize in the sale of Hydropool hot tubs & swim spas for Central/East Ottawa, specifically Orléans and parts of Eastern Ontario. We carry a great variety of water care products and specialize in water testing and training our clients on the proper care of their equipment.