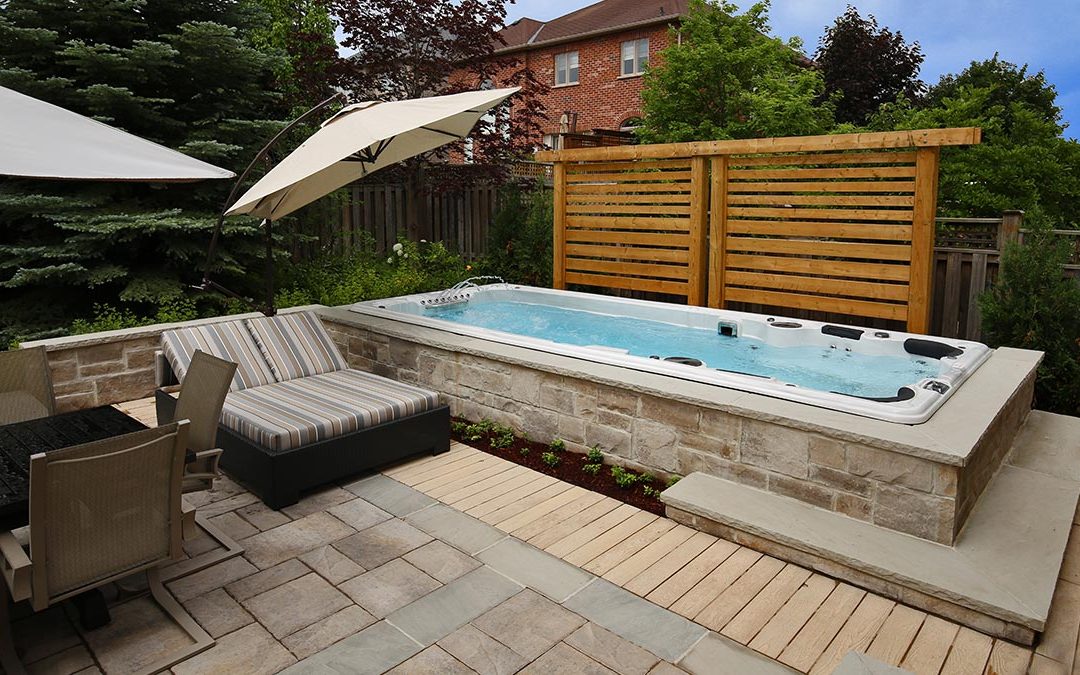 In the last 5 years swim spas (also known as “all season pools”) have gone from being almost unknown to one of the most popular types of pools in Canada. But what are swim spas anyway, and how do they differ from a regular pool? In this article, we will explore what swim spas are and why they have become so popular.

What Are Swim Spas?

Swim spas are small heated pools that are designed to be used year round; even during the long, cold winters of Canada.

Originally designed to be the perfect fitness pool, most swim spas also generate a current for people to swim against. Unlike swimming in a traditional pool, in a swim spa you never stop and turn around. Instead you swim continuously in place.

Another way swim spas differ from traditional pools is in their construction. In order to work efficiently during the winter, swim spas are essentially built like giant hot tubs. Most consist of an insulated acrylic shell, a composite cabinet, cartridge filter, electric heater, and water pumps.

Now that we know a little more about what swim spas actually are, the question becomes why would you want to buy one?

Why Are So Many People Buying Swim Spas?

There are several reasons why more and more people are buying swim spas to use as an all season pool, rather than a more traditional in ground or above ground pool. These include:

With yards getting smaller and smaller, not everyone can fit a traditional pool in their backyard. The more compact size of swim spas mean that they can fit in areas where other pools simply can’t.

Not only that, swim spas can be installed above ground, in ground or anywhere in between. They can also be installed in as little as a few hours and only require a concrete pad and an electrical connection. This means that swim spas can be easily integrated into any landscape design, without completely tearing up your backyard.

Another reason why many people are turning to all season pools is the short swimming season in Canada. Unless they are willing to spend a fortune on heating their pool, most pool owners in Ottawa really can’t get more than 3-4 months of swimming. The compact size and added insulation of swim spas mean that they can be heated at a fraction of the price of heating a pool, extending the swimming season for as long as you want. In fact, most swim spa owners are swimming 6-9 months of the year!

There are 3 main reasons why swim spas are the perfect cold weather pool:

When the winter arrives, pools without insulation are forced run constantly to prevent water in the pipes from freezing. This is because pool pipes are generally pretty small (2″ wide or less). In sub zero temperatures, that small amount of water can freeze in as little as a couple of hours if it is not kept heated. By surrounding their pipes in insulation, swim spas keep the pipes from freezing, without the need to run the heaters.

Another reason why people are buying swim spas is that they’re less expensive than an in-ground pool to purchase. While most in-ground pools will run you between $40,000-$60,000 plus landscaping costs, an average swim spa only costs between $20,000-$30,000 and doesn’t require extensive landscaping.

Not only are swim spas cheaper than an in-ground pool to purchase, they’re also much cheaper to maintain. As we’ve just seen, extending your pool’s swimming season can easily cost $500 per month in heating alone. Heating and running a swim spa in the colder months, on the other hand, costs a fraction of that. Most of our swim spa customers report that they can heat their water in the fall for $100 or less per month!

Since traditional pools are so much larger than swim spas, they require more chemicals to keep the water clear and much larger pumps and heaters to run properly. These larger pumps and heaters come with equally high running costs. For example, a standard pool pump will generally cost between $2-3 per day to run while a typical swim spa pump costs only around $1 per day to run, with some ultra efficient systems, like those found in Hydropool Swim Spas, costing as little as $0.33 per day!

Another advantage of swim spas is in their ease of maintenance. People today have less and less time available to them. The weekly ritual of brushing, vacuuming and skimming a pool is time consuming; time that can better be spent enjoying your new pool! Due to their compact size, swim spas require a fraction of the maintenance and can be looked after in a matter of minutes a week.

Some, like Self-Cleaning Hydropool Swim Spas, go further and add floor vacuums and pressurized filtration to greatly increase the efficiency of the filtration system, and further reduce the amount of maintenance needed to keep the water clean and clear. This lack of maintenance is especially useful in the winter. The last thing that you want to do when it is -10C outside is to go outside and clean your pool for 1/2 an hour.

Another reason why people are buying swim spas is their built-in swim currents. Even with all of the fad workout programs that currently exist, swimming is still one the best exercises out there. It is a full body cardio workout and is very low impact. For this reason, many people are turning back to swimming as a way to stay in shape.

Fortunately, there is one system that solves these problems. Hydropool’s AquaTrainer swim current system is the next generation of jetted swim spa currents.

AquaTrainer swim spas use special widemouth jets to power their swim. These jets also include special fins that break up the rotational turbulence caused by the jet pumps. Together these create a wide, turbulence-free swim current. This current is also powered by two large swim pumps capable of generating current speeds between 2km/h and 17.5km/h, more than enough for non-professional swimmers.

With all of the benefits that swim spas offer over traditional pools, it’s no wonder that swim spas have exploded in popularity over the last few years. Whether you’re looking to save money, extend your swimming season, get in shape, reduce your weekly pool maintenance, or simply relax; a swim spa might be what you’re looking for!

We specialize in the sale of Hydropool hot tubs & swim spas for Central/East Ottawa, specifically Orléans and parts of Eastern Ontario. We carry a variety of water care products and specialize in water testing.